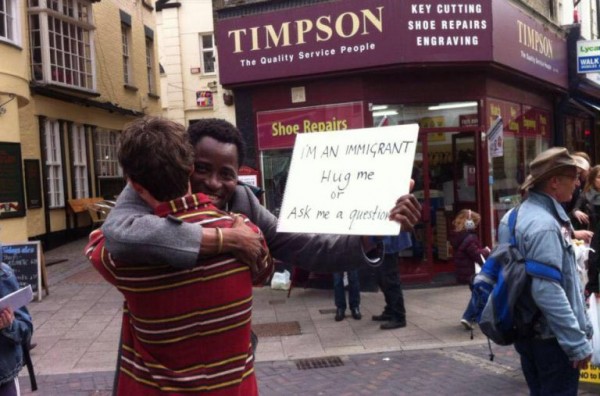 This week, we’ve got a speaker manifesto in response to boring academic conferences, stories of men leaning in, and a revolutionary way to take on anti-immigration policies: hugs.

If you know anything about our mission, part of it is challenging the myopic thinking and redundancies that conferences often bring. What can we do to put an end to the boring conference? This speaker manifesto is a good place to start.

Salesforce is the latest company to step up to the equal pay plate: Its CEO is combing through all of its workers’ salaries to find and eliminate any gender pay gap.

Rather than focus on the horror stories of what it means to be a woman in the bro’ed out tech world, project “wogrammer” highlights the achievements of female engineers.

We’re super excited about this movie about how youth of color are redesigning the future through coding.

Smith College is the latest women’s academic institution to recognize that all women, transgender and cis, should be allowed to attend. (Including those who come out as trans men as well.)

The United Nations has been around for 70 years, women make up half the population, yet a woman has never held the position of secretary-general. It’s time for a change.

The latest from our FRESH crew…

To all the dudes out there, you guys can “Lean In” too. Julie Zeilinger explains how some dads are leaning in like never before.

In the lasting landscape of racial grief, all black people deserve justice. Brittney Cooper contends with this pain in her latest Salon article.

Bisi Alimi spent his weekend hugging strangers in the street. Read why.

Mychal Denzel Smith appeared on MSNBC to discuss how the police should become irrelevant if we have full economic, social and political equality for all people.

For those who celebrated Cinco de Mayo this week, you should probably read what Latoya Peterson has to say.