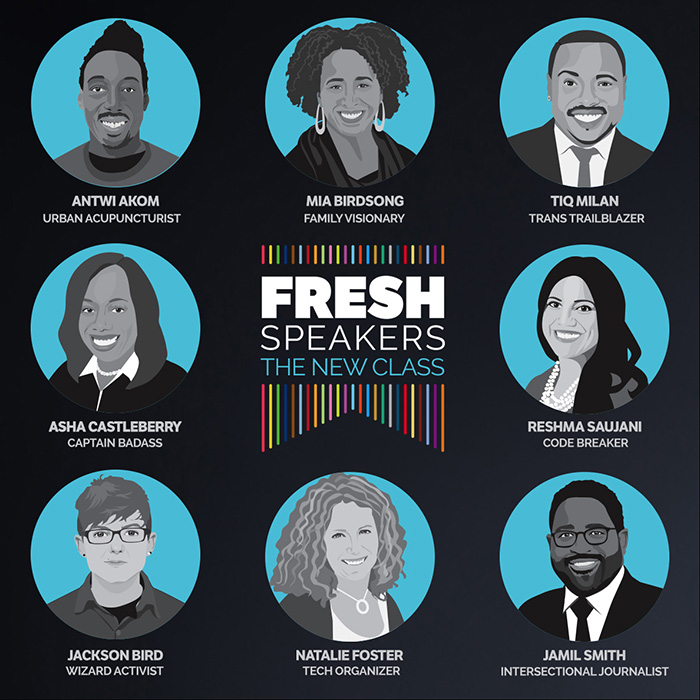 Modern day “thought leaders” are everywhere–we see their mugs on our televisions, their memes on our Facebook feeds, and witness their keynotes at the latest hot conference. Sometimes, it feels like you can’t escape the same ten faces. Best-selling books and having a boatload of Twitter followers is great, but are those really the only qualifications for having something worthwhile to say? And why are they overwhelmingly white and male?

This is particularly true when it comes to the conference circuit. Not only are the same people giving the same keynotes, but both their identity and expertise often doesn’t reflect the range of people doing creative and inventive work in the 21st century.

We got sick of hearing ourselves complain. As we’d attend conferences, we’d frown about the overwhelming whiteness of panels, tweet about dude-only line-ups, and shake our heads at hearing yet another well-known author repeat the same stale idea from coast to coast. We’d see white male speakers get paid handsomely and VIP treatment, while women of color speakers fight to get just their travel costs covered to participate in the same event.

At the same time, we also know how hard it can be to curate a really kick-ass conference. Plus, we didn’t just want to point fingers; we wanted to make things better. So, in October 2014, we launched FRESH Speakers, a motley crew of 25 truly fresh thought leaders bringing both ideas and action to the podium.

And, for 2016, we’re bringing in our next class of speakers. We couldn’t be more proud to collaborate with this new clan, coming from a range of experiences and work: Mia Birdsong challenges people to consider that the answer to poverty may be the ideas and innovation of poor people themselves; Jackson Bird “turns fans into heroes” by activating young fan communities to create change in the world; Reshma Saujani works to close the gender gap in technology by giving girls the role models and training they need to get involved in STEM fields; we also have journalist Jamil Smith, academic innovator Antwi Akom, transgender pioneer Tiq Milan, technology organizer Natalie Foster, and foreign policy expert and U.S. veteran Asha Castleberry.

Learn more about our great eight and find the rest of our incredible speakers here, and let’s make the public conversation a hell of a lot more interesting.