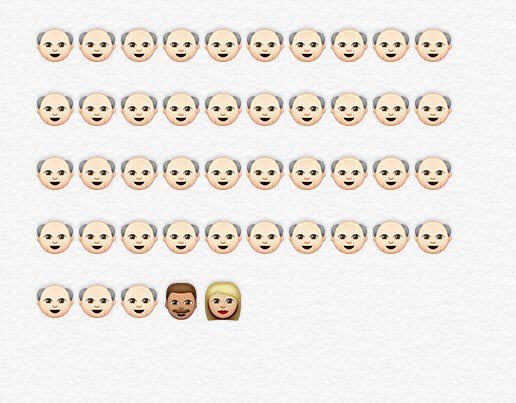 This week we’re thinking through alternative ways to achieve justice outside of our (broken) political justice system, the potential for a “universal basic income,” and grappling with the emotions of this historic election cycle.

If you haven’t already read the letter that the Stanford sexual assault victim wrote to her attacker, Brock Turner, you must. It’s an important, haunting, vulnerable, and brave account that society needed to hear.

A visual history of gender and jobs in the U.S. shows us the reality of gender bias.

Hillary Clinton is the official democratic nominee making her an official lady-boss-barrier-breaking-badass history maker. But for those who grew up with women in politics as the norm, we must remember the emotional historic context for this win.

And for all the feels watch this compilation video of Hillary’s journey.

Two of our fav actors, Kerry Washington and Aziz Ansari, discuss diversity, casting, and stereotyping in Hollywood. Now we just want to watch them in a romcom.

Our electorate is older and whiter than we might think — and that’s scary.

ReFRESHing speeches of the week: With graduation season upon us, here’s some sage advice from some lady bosses that we can all use at any stage of adulthood.

With the movement for a “universal basic income” on the rise, the question is not do we have the money, it’s do we have the political will. Natalie Foster weighs in on KQED.

The U.S. election season is basically a two year process now, making election fatigue very real. Jamil Smith steps in as a political guru and offers a practical solution to shorten this cycle.

We’re so proud to see Sarika Bansal featured on Solution Journalism Network’s list of 60 journalists leading in the field.

It has taken almost exactly a century since white women got the right to vote to have a white woman represent a major party nominee for president. Brittney Cooper explains why this matters and why she’s a radical Black feminist who’s voting for Hillary.

One of our co-founders, John Cary shares why his best conversations with men happen while running.

We should stop expecting a broken criminal justice system to provide survivors of sexual assault justice. Instead, Julie Zeilinger believes we can give survivors choices for restorative justice and trust they’ll make the right decisions for themselves.

FRESH Partner, Courtney Martin wrote her own letter to her daughters about forgetting these “weird old days” where power was inextricably linked to sex.