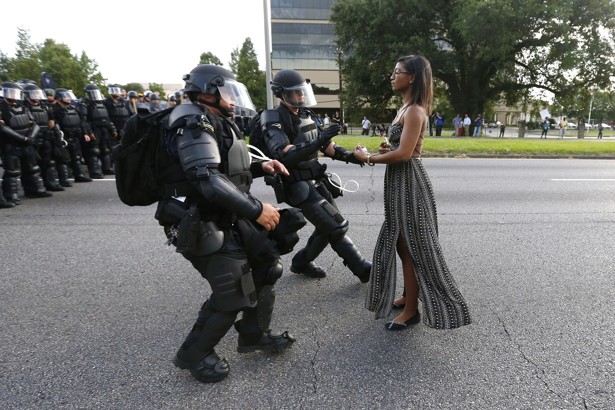 This week we’re listening to a new podcast that flips the script on comedy, celebrating a special Emmy nomination, and learning about “righteous bravery.”

This iconic image from a Baton Rouge protest embodies so much that the Black Lives Matter movement is: peaceful, strong, and powered by women.

The Red Summer of 1919 consisted of “racial and gendered fights around equality of opportunity against a backdrop of global anxiety and violence.” Sound familiar?

Celebs stepped up to make this powerful PSA about the 23 seemingly mundane ways you can be killed while being Black in America.

Sick of listening to white guys? Check out Phoebe Robinson’s new podcast ‘Sooo Many White Guys’ and hear her and others flip the script on the world of comedy.

Speaking of, pretty much all of Trump’s GOP Convention speakers are white and male and no one is surprised.

Citing that he is would be a “disaster for innovation” and that “America’s diversity is our strength,” 140 tech leaders publicly slam Donald Trump.

Aziz Ansari is the first South Asian American actor nominated for an Emmy and another awards show gets a little less white and a little more diverse. Boom.

ReFRESHing Talk of the Week: Refinery29 hosted an important conversation between Jamia Wilson, Amani Al-Khatahtbeh, Seamus Kirst, and others, where they discussed allyship, police accountability, and how we can all support one another.

What can you do in the wake of so much tragedy? Jamia Wilson believes we need “righteous bravery,” and offers seven ways for you to flex your courage.

As a self-identified ‘Old Person’, Jackson Bird, offers sage advice to first time college students. Top tips include the secret perks of being sexiled, and why you want to join extracurriculars (hint: free food).

Mychal Denzel Smith talks to Melissa Harris Perry about the importance of anger, how visibility does not equal justice, and why his book is as Black as they come.

Speaker Spotlight: Emily May is no stranger to speaking her mind. As a co-founder of Hollaback! she is committed to making every woman feel safe, empowered, and ready to speak up against street harassment.

Dena Simmons asks, “how can we show disenfranchised Black students that they matter when everything else is telling them otherwise?”

When respectability won’t save you and arming yourself can’t protect you, how do you survive in America while Black? Jamil Smith grapples with that question for MTV.