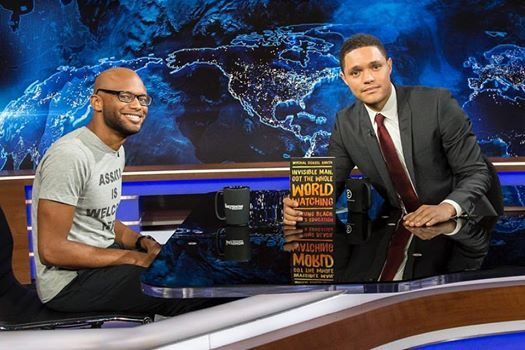 This week we’re sharing the terrifying truth behind Trump’s white racial justice agenda, the bright nonwhite, nondude future of podcating, and how one of our speakers got the whole world watching on The Daily Show.

Two-time Olympic medalist? Doesn’t matter if you’re married, your husband will probably get the credit.

The future of podcasting is looking brighter and more diverse than ever, meaning we get to hear from nonwhite and nondude folks. Pretty freakin’ awesome.

#OscarsSoWhite failed to include the stories of overt racism experienced by those hidden behind the camera.

Donald Trump doesn’t have a single woman on his economic, management and strategy, or foreign policy teams. But he does have five guys named Steve.

It would take the average Black family the length of slavery to build up the wealth of a white family today.

ReFRESHing Talk of the Week: This TED Talk reminds us that when we design for disability we’re really designing better solutions for us all.

Mychal Denzel Smith got the whole world watching on The Daily Show with Trevor Noah this week.

Sarika Bansal recaps The Development Set’s forum discussion about philanthropy, with a critical look at the world of big money from Courtney Martin.

You don’t wanna miss Ann Friedman and her bestie Aminatou Sow in LA on August 18th. It’ll be a night filled with lots of wine, unapologetic feminism, and real talk with rad women.

Jackson Bird was on WGNRadio this week, discussing his upcoming live “Will It Waffle?” show at The Chicago Nerd Comedy Festival and why you must have a birthday in the 90s to be on Snapchat.

When Trump supporters talk about racial justice, they’re talking about what’s being stolen from them as white folks. Jamil Smith explores the perversion of these identity politics in his latest for MTV.

Daniel Colón Ramos gets real about the prejudice in biomedical research labs that is “crushing [minority trainees] creativity and stifling their innovation”.

This week on WNYC’s The Takeaway, Asha Castleberry discusses the Middle East in a post-Arab Spring era, Trump’s ridiculous claims about ISIS, and her optimistic take on the future.

Speaker Spotlight: Good design doesn’t have to be expensive and Krista Donaldson knows this better than anyone. As the CEO of the nonprofit technology company D-Rev, Krista is designing life-changing technology for people living on less than $4 a day.