Valentine’s Day in America – The reFRESH

Photo from Change the Ref

This week we’re reflecting on the new meaning of February 14th in present-day America.

Valentine’s Day was yesterday. In addition to being a day to reflect on the revolutionary power of love and to show your support for survivors of sexual abuse, February 14th in the United States will forever onwards be a day of mourning and of fighting for action on gun violence (or at least until some type of change finally happens).

The New York Times published a heart-wrenching reflection of the past year in the lives of several survivors of the Marjory Stoneman Douglas High School shooting.

Some of the students’ parents have formed an arts-based activist group called Change the Ref to expose the disastrous effects of mass shootings. Yesterday, they unveiled the completion of a seemingly ordinary Valentine’s mural in New York City and handed out custom candy hearts, pictured above, at the mural’s unveiling.

Meanwhile, over two hundred student journalists from around the nation worked together to create Since Parkland, a documentation of the stories of children who have died from gun violence in the past year–many of whose names never made headlines.

As teenagers mobilize in the literal fight for their lives, many are also vying for public office in order to create change. One of those is 17-year-old Marcel McClinton, a survivor of a 2016 shooting at his church, who is now running for city council in Houston.

In other news, it’s Black History Month and there’s a lot of almost-laughably-timed white nonsense that’s been going on, but let’s focus instead on the positive, shall we?

Like this Colorado sports store that’s being forced to close after the owner decided to boycott Nike products when the brand supported Colin Kaepernick in their advertising campaign. Sweet, sweet karma.

And this door decoration by a Mississippi elementary school teacher reminding students of the humanity of the Africans who were sold into slavery. 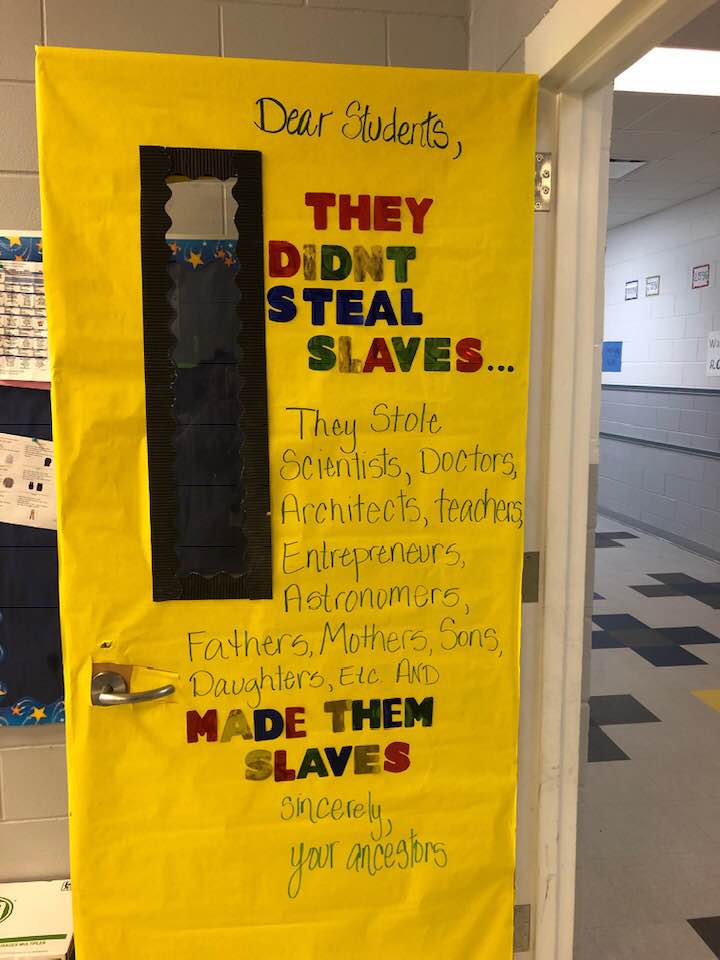 There’s also The New York Times’ new project Overlooked, which is publishing the obituaries of black individuals whose deaths were never previously reported by the newspaper and the absolutely stunning all-woman and femmes-produced edition of Out magazine, guest-edited by Janet Mock.

Plus, the Honorable Cheri Beasley was just named the first-ever African-American woman to serve as the Chief Justice of the North Carolina Supreme Court.

Finally, our reFRESHing Talk of the Week comes from one of our speakers, Ayana Elizabeth Johnson, whose TED Talk about how to use the ocean without using it up recently went live on TED.com!

Our speakers are all over our televisions this week!

Ayana Elizabeth Johnson appeared on Matter of Fact with Soledad O’Brien to discuss the ocean, climate change, and justice. The episode will air Saturday 2/16. Check your local listings.

And Simran Jeet Singh is interviewed in a new Netflix documentary, Alt-Right: Age of Rage. Watch a clip here or catch the whole film on Netflix.

Meanwhile Liz Ogbu was on San Francisco’s local NPR station discussing how to design cities for a changing climate.

Joah Spearman took to Medium to explain the dangers of “blitzscaling.”

Sarika Bansal wrote a piece about impact investment for which she, notably, did not interview a single man.

And finally, Jamil Smith explains how Howard Schultz’s “color blind” comment is a cautionary tale for other 2020 presidential candidates.