10:30am-12pm
SESSION 1: MOVEMENTS REDESIGNED
In a moment of such great precarity, the silver lining is that people are more galvanized than ever to put their money, energy, and bodies on the line for what they believe. But how do we harness all that good will in a way that makes foundational change, not just feel good experiences? Some of the nation’s most embattled movement builders and fiercest critics think together about where our movements are headed. 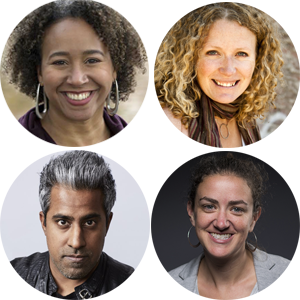 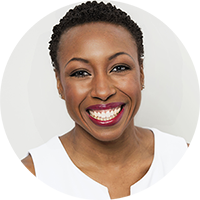 Honorary Event Chair
Tiffany Dufu is a catalyst-at-large in the world of women’s leadership and the author of Drop the Ball, a memoir and manifesto that shows women how to cultivate the single skill they really need in order to thrive: the ability to let go. According to foreword contributor Gloria Steinem, Drop the Ball is “important, path-breaking, intimate and brave.” In addition to raising over $20 million for women and girls, Tiffany is the founder of The Cru, a constellation of women committed to helping each other thrive. She is also a consultant to Fortune 500 companies and a sought-after speaker on women’s leadership. bio | @tdufu A Spring 2018 TED Resident, Queen Esther performs internationally in various projects with her mentor harmelodic guitarist James “Blood” Ulmer, including his iconic free jazz group Odyssey, as she forges her own sonic path with her jazz collective and her Black Americana outfit. Released in 2015, her critically acclaimed album The Other Side – “…the most exciting Afro-Americana album of the year.” (Paste) – is garnering airplay worldwide. | bio | @queenesther

1:15-2:45pm
SESSION 2: FRIENDSHIP: THE BASE UNIT OF SOCIAL CHANGE
While we keep our eye on the prize of systems and cultural change, we know that it has to start small and has to start somewhere. That small somewhere is so often a catalytic friendship–whether one that is like oxygen in a world where you often feel punched in the gut, or one that is productively uncomfortable, pushing you to a new level of consciousness. In this session, we look at both kinds and how they make us wiser people. Jackson Bird, a Texan-raised New Yorker, is a YouTuber, writer, FRESH Speaker, and all-around digital activist. He spent eight years organizing first-time activists through a pop culture lens with the Harry Potter Alliance and now focuses primarily on demystifying the transgender experience through his videos and podcast. Over 1 million people have viewed his TED talk, “How to talk (and listen) to transgender people.” A former TED Resident and YouTube NextUp Creator, Jackson spends his spare time hosting pub quizzes, watching documentaries, and working on his debut novel. bio | @jackisnotabird

Melissa Lozada Oliva is a spoken word poet & educator living in New York by way of Boston. She is the author of chapbooks “Plastic Pajaros & Rude Girl is Lonely Girl!” (pizza pi press) & “peluda” (Button Poetry), which explores the intersecting narratives of body image, hair removal & Latina identity. Her works have been featured on Buzzfeed, REMEZCLA, Glamour Magazine, Huffington Post, Upworthy, The Guardian, and her mom’s Facebook statuses. She is currently an MFA candidate at New York University. | bio | @ellomelissa

3:15-4:45pm
SESSION 3: THE AGE OF BELONGING
Conversations about “diversity” feel like they barely skim the surface of what we really need to be talking about and pursuing in this moment of reckoning. In this session, we attempt to reach deeper for language and wisdom that transcends the tired box-checking that too often stands in for real reconciliation and liberation. Jamil Smith is a senior writer for Rolling Stone magazine. After covering the 2016 election as a Senior National Correspondent for MTV News, Jamil’s political and cultural commentary appeared in several outlets, including The New York Times, Esquire, and The Washington Post. Most recently, he was both a weekly columnist for HuffPost and contributing opinion writer for the Los Angeles Times. Jamil wrote the cover story for TIME magazine’s February 19, 2018 issue about the film Black Panther and its cultural significance. bio | @jamilsmith City of the Sun is a genre-bending trio, breaking instrumental-rock norms since their inception in 2011. The band’s sound has an array of influences including indie rock, American folk, flamenco, and blues; it’s been called worldly, cinematic, a mix between Rodrigo y Gabriela and Explosions in the Sky. Having honed their signature sound as buskers in NYC, they gained wider attention performing at various TED and TEDx conferences, while posting live videos from exotic locations around the world. City of the Sun has toured with Peter Bjorn & John, G.Love, STS9, and Thievery Corporation; were featured emerging artists at Billboard’s Hot 100, Firefly, and beyond. In 2016, City of the Sun released their first live album ‘to the sun and all the cities in between,’ debuting at #12 on the Billboard Jazz Albums chart. more | @cityofthesun