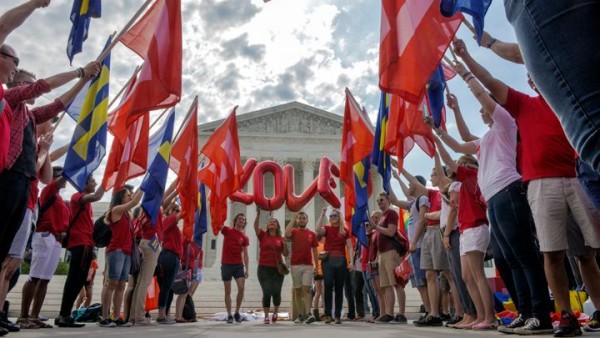 This week we’ve got lasting thoughts and actions from the tragic shooting in Charleston, a hilarious video flipping the gender equation in Hollywood, and a big step towards equality from the Supreme Court.

The Supreme Court just ruled that same sex couples can get married anywhere and everywhere across the U.S. We’re so proud that America (finally) stood on the right side of history.

For allies who are also parents and want to make change, this webinar will offer tools on raising race conscious children.

We heart Roxane Gay: Not only was her TEDWomen talk published on TED.com this week (and it’s awesome), she wrote an incredible piece on the power of whiteness, mercy, and why she can’t forgive Dylann Roof.

This hilarious video from Margaret Cho shows us what Hollywood would look like if women ran it (it also features the “diversity hire,” a white middle-class cis dude).

Inspired by bats, this teen’s invention is changing the way blind people experience the world.

Facebook had a whooping 1% decrease in its proportion of male employees. Unshockingly the company still remains majority male and white.

Sarika Bansal schooled this father on his politely racist explanation for not wanting to enroll his white kid in a predominantly black school.

After so much trauma, devastation and viciousness, Dena Simmons offers 9 ways educators can respond to Charleston.

Jamia Wilson has been protesting the Confederate flag since she was a kid. In this piece on Rookie Mag she explains why it’s about time we do away with a symbol that represents a “heritage of hate built on hate”.

In this clip from Brittney Cooper’s appearance on MSNBC, she asks whether or not “social structures will keep pace” with the backlash from the right as the Confederate flag gets taken down across the country.

The first step towards gun reform might actually be us taking a long hard look in the mirror. Latoya Peterson reveals the truth about America’s connection to guns.

Julie Zeilinger shows how, in one quote, Jessica Williams nails the problem with women on the $10.

50 million people in the U.S. prioritize meaning over money. Aaron Hurst explains the importance of recognizing these purpose-driven professionals.